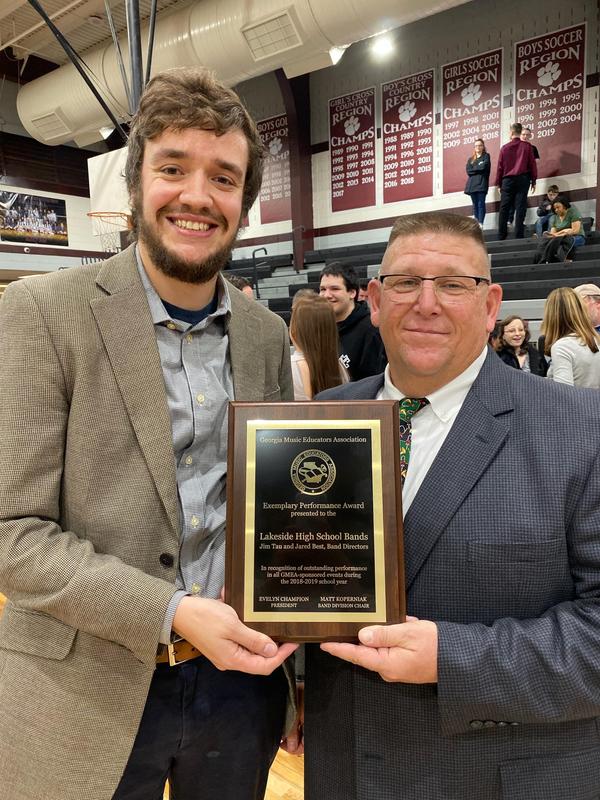 The Lakeside High School band was recently presented with the prestigious Georgia Music Educators Association Exemplary Performance Award, which is presented to only one band in the state, at the school's band concert Thursday, December 12.

The Lakeside High School Band program was the recipient of the Georgia Music Educator’s most prestigious award, the Exemplary Performance Award. This award is given to one band in the state of Georgia each year.

The band was chosen based upon its involvement and success in all of the Georgia Music Educator’s sponsored events. It is an award that is sought after each year by aspiring bands across the state.

"I’m so proud of our kids/families and the overall band program for their continued hard work and drive to achieve this milestone," said LHS Band director Jim Tau.

The award was presented by the GMEA Alan Fowler, Vice President All-State, before the band's Christmas concert last night at Lakeside High School. Mr. Fowler made a special trip from Atlanta to bestow the recognition upon the band. The plaque awarded to the Lakeside High School Band. GMEA VP, Alan Fowler made a special appearance at Lakeside High to present the award Thursday evening before the band's holiday concert.