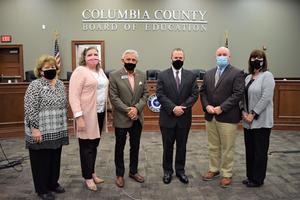 Congratulations to Dr. Steven Flynt, who has been selected to serve as the superintendent for the CCSD following the retirement of Dr. Sandra Carraway. We welcome Dr. Flynt and his family to Columbia County.

At a special called meeting Thursday, January 28, 2021, the Board of Education unanimously voted to appoint Dr. Steven Flynt as the new superintendent of Columbia County Schools, to succeed Dr. Sandra Carraway upon her retirement at the end of the 2020-2021 school year.

Dr. Flynt began his life as an educator in 1993, serving as junior high school teacher at Miller Grove Junior High School in Dekalb County. He went on to teach high school science at Dacula High School from 1994 – 2002 and thereafter to be promoted to assistant principal, where he served from 2002-2006. From 2006 – 2008, Dr. Flynt served as high school principal at Peachtree Ridge High School in Gwinnett County, a school with over 3,200 students. During his tenure, the school received the Governor’s Cup Award for Greatest Gain in SAT scores. It was named Newsweek Top High School Achievement for Advanced Placement. In 2008, Dr. Flynt was promoted to area superintendent of Gwinnett County, over area five, where he was responsible for 22 schools. Also from 2008 – 2010, Dr. Flynt served as the Chief Academic Officer for Gwinnett County Public Schools. From 2010-2013, he served as Associate Superintendent in charge of the division of school leadership and operational support. From 2013-2016, Dr. Flynt served as Chief Strategy and Performance Officer and was responsible for the development, coordination and implementation of strategic initiatives, among other responsibilities. Since 2016, Dr. Flynt has served Gwinnett County as Associate Superintendent in charge of the Division of School Improvement and Operations. Dr. Flynt's responsibilities include, but are not limited to, oversight of an annual budget of more than $2 billion and a building program that has opened 38 schools in the past 12 years. Additionally, Dr. Flynt is a graduate of Harvard University Public Education Leadership Project and has been a presenter at multiple educational leadership conferences, including Georgia School Boards Association and the Georgia Association of Educational Leaders. Dr. Flynt is well known and highly respected in educational circles, at the state Capitol, and the state department of education.

Dr. Flynt is married to Kristin, and they have three daughters, Sarah, Emily and Jessica. In his free time, he enjoys hiking, canoeing, water sports, boating, fishing, and lacrosse, among other things.

We welcome Dr. Flynt and his family. Members of the Columbia County Board of Education are pictured above, with Dr. Steven Flynt - pictured fourth from left.